How to be Snake Aware

Spring and summer are such a lovely time of year in all parts of Australia. Generally, there’s no better time to get outside again with your four-legged friend and start enjoying the sunshine.
Of course, one reality of this time of year is the re-emergence of snakes, which of course are cold blooded reptiles and are coming out to enjoy the warm sun, just like you. And snakes will be a reality in backyards, parks, creeks etc right through to March in most parts of Australia. Having said that, you may be unlucky enough to come across a snake at any time of year and be aware that they are often active at night.

Unfortunately, the sight of a snake generally excites dogs, and many will want to go in for a closer look or even go on the attack, leading to a potentially lethal bite. Owners sometimes end up getting bitten as well in an attempt to separate their dog from the snake.

What you should know about snakes
• Snakes are not aggressive and will much rather retreat from a threat such as a dog.
• It is both unwise and illegal to attempt to kill a snake. Rather, just watch where the snake goes from a safe distance and let others nearby know about it.
• If snakes are threatened or cornered, snakes will defend themselves. Brown snakes in particular are quick and have a large strike area.
• Be careful of apparently dead snakes as well. Your dog may go in for a closer look and discover it is still actually alive. Dead and decapitated snakes can deliver a dangerous bite, as their biting reflexes remain intact for some hours after death.

Snake awareness around the home
There are some simple things you can do around your home to make it less attractive for snakes.
• Get rid of long grass and weeds where snakes feel safe and are hard to see.
• Minimise food that may attract snakes, such as bird seed, dog or cat food etc.
• Away from home, the key to preventing your dog getting bitten by a snake is obedience. At the key moment your dog becomes excited and approaches a snake, it is crucial that your pet returns when called.

Snake awareness when walking the dog
There are things to be aware of when walking your dog throughout the warmer months.
• At times and places where snakes are likely to be found, keep your dog on a lead, or by your side at all times.
• Creeks, rivers, and other water sources are generally attractive to snakes as well as dogs and humans.
• Never let your pooch dig at holes or under rock. Chances are the scent of a snake could be strong and enticing your dog for a closer look. 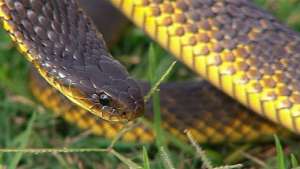 Head To Tail Pets are open 7 days a week.